Port of Borg is one of the three pilots in the Horizon H2020 project E-LAND, and it is located in southern Norway. The goal of the Port of Borg is to develop it into an energy hub, offering energy and services to both land and sea transport.

With tools developed within the E-LAND project, Port of Borg aims to optimize the usage of solar electricity, batteries, electric vehicle charging while lowering the cost of electricity and district heat from the external grid. 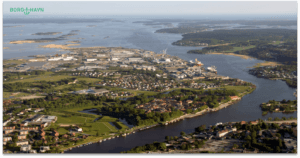 Port of Borg is located on a peninsula close to Old City in Fredrikstad, at the mouth of the river Glomma.

As in many other ports, the energy consumption by the port itself is small, and mainly related to internal transport, crane operations and buildings. The energy consumption related to ships at quay and logistics activities with terminal equipment and heavy traffic used for cargo handling to and from the port is significantly greater. The Port of Borg pilot activities are intended to facilitate subsequent upscaling, such as using results from controlling EV charging to be able to efficiently charge heavy vehicles required for land transport and local handling.

As an E-LAND pilot, our focus area is on the existing loads for the port’s own activity, where the use of electricity from cranes, terminal area lighting and cooling/freezer containers dominate. These loads are not easy to shift, and the energy cost is small relative to the revenue generated by these services. As a result, the ability of Port of Borg to shift the loads using stored electricity from batteries is important.

With funding from the EU through the E-LAND project, Port of Borg has invested in a battery system, which will be used as a key component in the piloting activities in the port. Tools developed in the project, like the “Energy forecaster” and the “Optimal scheduler”, will control the battery system. The battery will be charged during periods when the port’s electricity demand is low and it will be used to reduce power peaks in periods when usage is high. Another use is to store cheap energy and use it when the energy cost is high. In this way, the energy generated by the port’s own solar panels can have supplement from energy purchased at low prices.

In order to allow for control of local assets, Port of Borg has invested in a local communications network with a metering infrastructure that enables a good visualisation of production and consumption. A battery system, EV chargers and a thermal system use a control system to achieve different goals for energy usage and production.

The port has been careful in its design of the control system, and we use it to open and close access for control from an external system. This way,  Port of Borg may be able to test the intelligent applications created in the E-Land project with the Universidad de Girona (UdG) in Spain and Intracom Telecom (ICOM) in Greece. 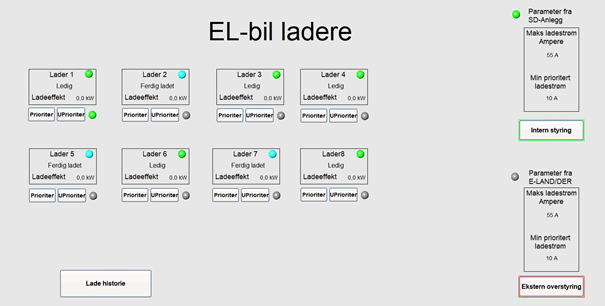 Display show charging of EV’s, their prioritization and status (charging, finished charging and unoccupied). This is mainly a learning process – before installing fast charging of electrical (BEV) heavy vehicles in the future.

If expedient, the experience and design prepared through the E-LAND project can be used further in energy cooperation with the port’s neighbours. Øra is an important industrial area locally and regionally, with a lot of power-intensive industry.

Port of Borg will, in any case, utilise E-LAND and the intelligent applications developed here in its efforts to create a green, emission-free port. E-LAND officially launched in late 2018, and we are now entering the piloting stage of the project. This means that we will test the tools developed in the project and eventually test use-cases in the Port of Borg. By the fall of 2021, all connections and connectivities should have been tested and adjusted before the actual testing of use cases towards the end of this year.

>> Read more about the Port of Borg

@elandh2020 : 📢We are featured in the @BRIDGE_H2020 September newsletter issue, for our Open Access Webinar on "Dynamics of Commu… https://t.co/bC6yGdPtPz ( - 1 week ago)

@elandh2020 : On October 8, @elandn2020 takes part in the webinar DYNAMICS OF COMMUNITY ACCEPTANCE of #cleanenergy infrastructure… https://t.co/NEQdWODomL ( - 1 week ago)