Ships using electricity from renewable energy instead of burning fossil fuel is a new and important element that will go into E-LAND’s pilot Borg Harbour (BIKS). Though, the financing of the ship-shore connection project is not a part of E-LAND project, the results will have a big impact on E-LAND, because the design of a multi-vector simulation (MVS) system will have to take this future scenario into account. 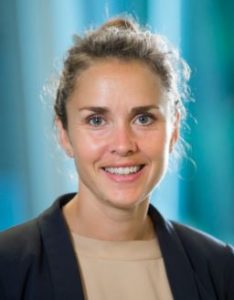 According to calculations, Port of Borg’s consumption will be doubled when ship-shore connections are installed compared to today’s consumption by e.g. electrical cranes, reefers and port lightening. With this scenario in mind, it is crucial for BIKS to be able to simulate using a MVS system and to make investments in solar panels (PV) and other renewable resources.

The first ship is planned to plug-in autumn 2020 and will need electricity when berthed. BIKS is making preparation for this and BIKS’ new warehouse 14 has a roof of app. 19 000 sqm, which is constructed to be easily fitted with PV panels.

The ship-shore connection is expected to have an output on effect (kW) and energy use (kWh) that in periods will dominate the electrical system in BIKS. Thus having a large impact on the possibility to utilize PV and all other energy vectors in E-LAND regarding electricity. 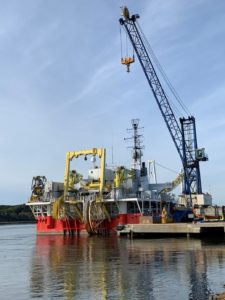 The ship Nexans Skagerak. The company Nexans produce large cables for subsea use, both telecommunications and energy. Their facility close to BIKS is used when huge cables are loaded to the vessel Nexans Skagerak in preparation for laying subsea cables all around the globe. During this work, this vessel may stay for several weeks at port, and will be a large consumer of ship-shore electricity in these periods. (Photo: Smart Innovation Norway)

When PV panels are installed, the resulting DER (distributed energy resource) may then be part of the pilot site of BIKS when demonstrating the E-Land toolbox. Also, as part of E-LAND project, the partner RLI develops a multi-vector simulation tool (MVS). Together with RLI, BIKS will use the case of planning the new DER at its Warehouse 14 as a case during the development of the MVS.

“As the tool and the planning of BIKS’ new DER is done in parallel we look very much forward to getting even more results from the development of the MVS tool”, says Marianne R. Kahrs.

“At BIKS, we try to make ship-shore connections available to all vessels. The total CO2 reduction from this effort is stipulated at app. 540 tons. The most impact on CO2-reductions we will get from ships that frequent the port regularly and spend significant time at the port”, Marianne continues.

At the local level, boats and ships have significant emissions within a community, both with regards to CO2, NOx, micro particles and other pollutants. For instance, sea transport has calculated that some 7 % of the CO2 emissions in Fredrikstad municipality. There are strong efforts internationally to ensure that vessels use ship-shore connections to replace burning diesel while at port. This strongly reduces CO2 and other pollutants from the vessels.

University as an Energy Island: Achieving carbon-neutrality with the ELAND Toolbox

“Take urgent action to combat climate change and its impacts”[1] is one of the Sustainable Development Goals of the United Nations. To contribute to this… (1 month ago)

‘’I think the Business Model Innovator is important because there is no one-fits-all business model, for different energy islands’’ says Prof. Moritz Loock from St.… (1 month ago)

In the ELAND Toolbox, the Common Impact Model is the core community engagement tool. The tool aims to understand what it takes to achieve and manage… (1 month ago)

Creating synergies and complementarities between Horizon 2020 projects is a current priority for European authorities and communities. In this context, Smart Innovation Norway was a… (1 month ago)